A team from the Ministry of Health led by Dr Diana Atwine, the Permanent Secretary and Dr Henry G Mwebesa, Director General Duties has signed a Memorandum of Understanding with the Kingdom of Tooro in a bid to engage the cultural institution in disease prevention and promotion of good health practices.

This move is aimed at utilizing the kingdom’s structures and engaging the cultural leaders in sensitizing the people about disease prevention through the various kingdom programmes that unite the people.

She further noted that such a Memorandum of Understanding was also signed with other kingdoms including Buganda and Busoga.

In all these engagements, Atwine said, statistics on major health concerns are shared with the people “so that they know how they are progressing.”

“With the Memorandum of Understanding, we are looking at key areas for our interventions; like maternal and child health, HIV, malaria and other issues,” she added. 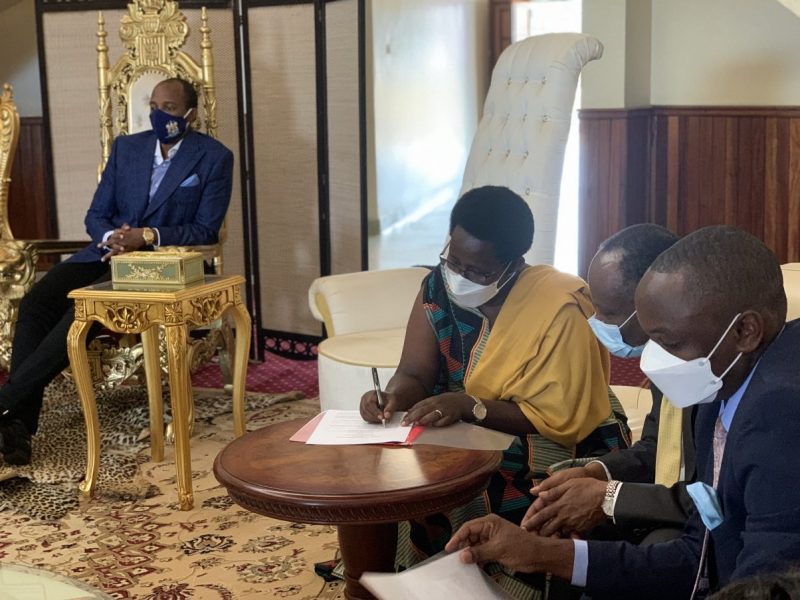 In the same vein, Dr. Atwine noted Tooro region has a high HIV prevalence which is about 10% as per the national statistics on HIV/AIDS and there is a high number of teenage pregnancies and maternal deaths.

“Therefore, we want to call for the voices and the good will of the kingdom of Tooro and especially the King who has been the ambassador of good will and HIV prevention to reach out to the population,” she said.

Atwine stated that this will reinforce people’s access to other health services like immunization as its coverage is still low.

“We want to use the structure of the Kingdom, local government and other cultural institutions out there and the sub counties to make sure that they reach out and continue educating the people. We are glad that the kingdom has a youth centre, which brings youth together to discuss issues of  health, culture, employment among others,” she concluded.